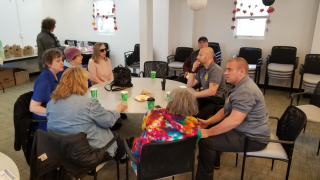 The Maplewood and South Orange Police Departments, Senior Citizens Advisory Committees, and SOMA Two Towns for All Ages are proud to announce the launch of Operation Blue Angel.

This safety program aims to aid older adults who are either over 55 years of age of medically impaired and are frequently alone. Operation Blue Angel gives emergency services quick access to a residence if the resident is unable to open the door.

Those who participate in the program will receive a small, free combination-controlled lock box to store a spare key in. The key is provided by the resident, and the lock box will only be accessible to the resident’s local police department; no one else will have the code. In the case of an emergency where the resident is unable to come to the door, police, the fire department or emergency medical services (EMS) will be able to enter the home using the spare key.

Joan Crystal, member of the Maplewood Senior Advisory Committee, expressed her approval for the program. Ms. Crystal explained that Operation Blue Angel eliminates Maplewood seniors’ fear of being unable to reach help in case of illness or injury.

“This lock box becomes a lifeline in such circumstances. I would strongly recommend that Maplewood seniors living alone give serious consideration to participating in this program,” she stated.

Family members of the resident are also able to contact the police department if they seek to perform an emergency welfare check on the resident. The program has been praised for allowing emergency police access without damaging the home.

“Operation Blue Angel is a fabulous opportunity for our Seniors to have an added level of support from our community. This volunteer program will allow Seniors enhanced peace of mind when it comes to safety in their homes,” stated South Orange Village Trustee Karen Hartshorn Hilton, who is “proud to be supporting it.”

Participation is completely voluntary, free, and may be stopped or started at any time. Similar programs have already been implemented in several New Jersey towns, including Montclair, Princeton, Raritan and Franklin Lakes.

Operation Blue Angel is largely the effort of collaboration between the towns’ health aging initiative, SOMA Two Towns for All Ages and the two towns’ police departments.

SOMA Two Towns for All Ages is funding this program. The age-friendly initiative, coordinated by Cathy Rowe, recognizes the importance and interests of seniors in Maplewood and South Orange and works to empower residents to “age in place.” The initiative’s recent focus has been on housing. Ms. Rowe stated that SOMA Two Towns is “looking at a wide range of ways to help people stay in their homes.” Operation Blue Angel is a tool in furthering that initiative.

Maplewood residents can call The Community Service Bureau and speak with Det. Sgt. Reeves at (973) 761-7613 or email  SReeves@maplewoodnj.gov

The resident can then make an appointment with a police officer to talk about Operation Blue Angel and set up the lock box. They will also be able to discuss other safety programs for older community members like Register Ready and the File of Life.

SOMA Two Towns For All Ages hopes that South Orange-Maplewood residents take advantage of this free program to promote safety and peace of mind at home.